Is it all a Scam?

So I'm riding the bus yesterday, and I hear this couple talking. I'm not really listening, because personally I use bus time to people-watch and day-dream about film scripts, but they said something that grabbed my attention:
"blah, blah,... total scam!! Blah.. blah"
And it got me thinking, what is a scam?

I try to remember back to the first time I've heard the word, or maybe the first significant time.
I was maybe 11 or 13, and my dad shared an interesting email with me to see what I thought about it.

"Dear Sir/Madam,
I am the Prince of (important far away Country). I am (blah, blah) and I have X amount of $$$ that I want to give away to you!
Please give me all your banking info and sell me your soul. (blah, blah)
P.S. Thank you for helping me out!"

It was slightly more eloquent than that, and very official sounding. I was in the childhood frame of mind that yes, of course, we should indeed take the money off this person's hands! That is when my father explained to me that is was a scam.
Though he didn't really explain what a 'scam' was.

Since then I've heard the word used for all sorts of things! "Those shoes are so over priced, what a scam!" "My massage therapist keeps telling me I NEED to come back, what a scam!""My email's been hacked, don't open the messages, it's a scam!"

Last week I even caught myself using the word. I had an audition to put on tape, (for a US pilot that shall go unnamed) and in doing my actor due-diligence I research the project to find out anything I could about plots, scenes, other actors, etc. And what do I find? About eight news articles on the first page of Google telling me all about the actress who's been cast in the role I'm auditioning for! But it's being shot in Canada, so apparently they 'have to' see a certain amount of Canadians. What a scam! Or is it?

The main reason 'scam' has been on my mind is actually because of a sticker. A sticker you might be seeing around town... 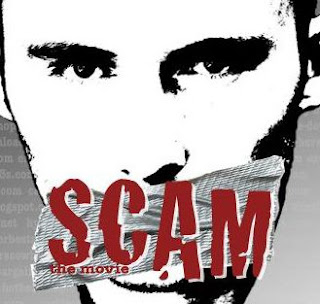 Two friends of mine, Sage Brocklebank and Patrick Sabongui are making a movie called SCAM. And they gave me some stickers to hand out and stick about town, to raise awareness about their film.


Their production company, Dreams Beyond Thirty, brought you “Felony” The Fringe Play, the award-­‐winning smash hit at last year’s Vancouver International Fringe Festival. Their latest venture is a new movie, “SCAM”: an electrifying crime drama about the very real phenomenon of telephone fraud, the scammers who perpetrate them and the elderly victims they prey upon.


Fascinating right? But the way they're making their movie is actually what's interesting! The film is an entry in the CineCoup Film Accelerator: a nation-wide competition that awards the winner with a ONE MILLION DOLLAR budget and a guaranteed theatrical release in Cineplex Odeon theatres in January, 2014.

You know what a big fan I am of creating one's own work! The contest ushers in the new generation of independent filmmaking so that micro­‐budget films can compete with Hollywood blockbusters!

They need some help. Because Cinecoup is about the people. People's involvement and people's opinion's actually matter.
The more 'likes' and fans they get on the site, the closer they get to move towards that $1 million!

Meet the team and check out the trailer because we can help them reach number 1! How cool will it be, when they actually make their movie, to be like 'Ya, I voted for that, helped make it happen, no big deal!'
That could be you!

I decided that my taped audition situation wasn't a scam, it was a reality of the film industry. A reality we have here in Vancouver, because we rely so much on LA. That's why I want to help build an industry here, and this Cinecoup project is helping with that!

Support work that's being created and made in your backyard, because trust me, it comes full circle!

Jane
Actress in Vancouver, Canada. Some of my other loves include; fashion, art, decor, crafts and telling great stories. This blog is here to share a little of what inspires me, and my journey of self knowledge while finding a place in this crazy, amazing industry and art form called Film.